Omega Dark Side of the Moon was and still is a true gem in the Omega’s Speedmaster collection. This handsome timepiece debuted in 2013, and it was the first watch of the iconic brand made entirely of ceramic, and by that I mean not only the case, but also the pushers, crown and even the dial. So, why the ceramic, one may ask?

Well, while not being entirely shatterproof, ceramic is still among the most durable materials out there. Zirconium dioxide is extremely scratch-resistant and very capable of withstanding exposure to acids and UV radiation. So, at the end, with Omega Dark Side of the Moon, we get heavily upgraded legend – a true Moonwatch of the 21st century.

From the stylistic point of view, a very few watches can stand tall in a direct comparison with Omega Dark Side of the Moon. The way the ceramic is treated is a joy to behold. With a finish that in a way emulates finish of stainless steel watches, Omega did a marvelous job by mixing the polished and brushed surfaces, creating a watch that is very stylish despite its masculine proportions. In this case, black is definitely a new black!

Borrowing heavily from the company’s rich heritage, Dark Side of the Moon is the watch that can be instantly recognized as a full-blooded Speedmaster. Of course, this is a very good thing, especially from the marketing point of view. Linking it with Omega’s arguably biggest success, Omega Speedmaster Pro (the first and the only watch worn on the Moon, by none other than Buzz Aldrin) will bring tons of old customers and space-program enthusiasts. For the new ones – let’s be honest and say that, despite its technical excellence, this is one very fashionable timepiece that will be a flying success among customers less interested in its (huge) horological values, and more in the pure style. 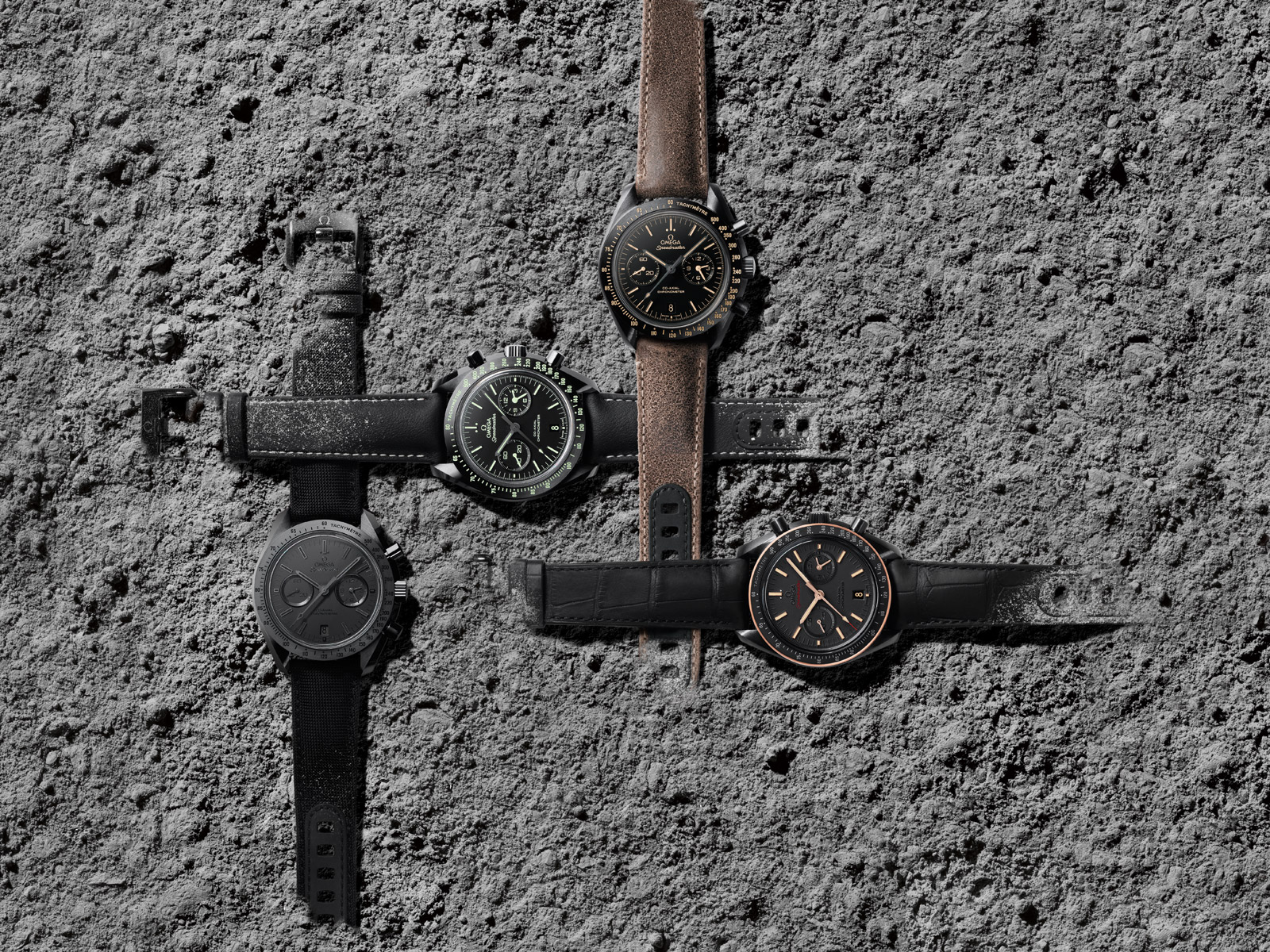 Technical details are also very impressive. The beating heart of this remarkable watch is Omega’s pride and joy, still relatively new caliber 9300, the automatic chronograph movement with column wheel and Omega’s trademark co-axial escapement. The movement is adjusted to five positions and, of course, is COSC certified. Caliber 9300 is widely regarded as one of the best automatic chronographs ever produced and its level of decoration (yes, it is visible through the transparent caseback) is absolutely astonishing.

I must be honest and say that particular version that I had in my hands isn’t the most legible watch around. But, its slick combination of black on black, with more than impressive matte finish of the dial and hands, looks so good that legibility issues simply becomes irrelevant. Its stealth effect is both stylish and macho, this is the watch that one can very well imagine with a black suit as well as with a casual minimal look.

So, at the end of the day, I really think that Omega scored with this one. While there are many worthy competitors out there, with most prominent Tudor Black Shield among them, Omega Dark Side of the Moon can be easily considered a “leader of the pack”. With its high-quality case, modern and stylish design and technical excellence, this watch presents a wonderful combination of various elements that make one product a hit that will last way longer than couple of seasons.

Shop online Omega Dark Side of the Moon